Inspired by the awesome Derbycon talk by John Althouse I wanted to give JA3 a try. After some Googling around the easiest way seemed like installing Moloch which has JA3 support baked in. This post is just a brief overview how to set this up and start exploring JA3 hashes. As a bonus, I also configured Suricata support for Moloch. Combined, I think this is a really good combo for network visibility.

Once you've grabbed the package, follow the instructions here:

In my scenario, I installed the Moloch viewer & capture components and Elastic all on the same box, this was all setup via the installation instructions above automatically.

Once the setup is complete, browse to https://:8005, you should see something that looks like this: 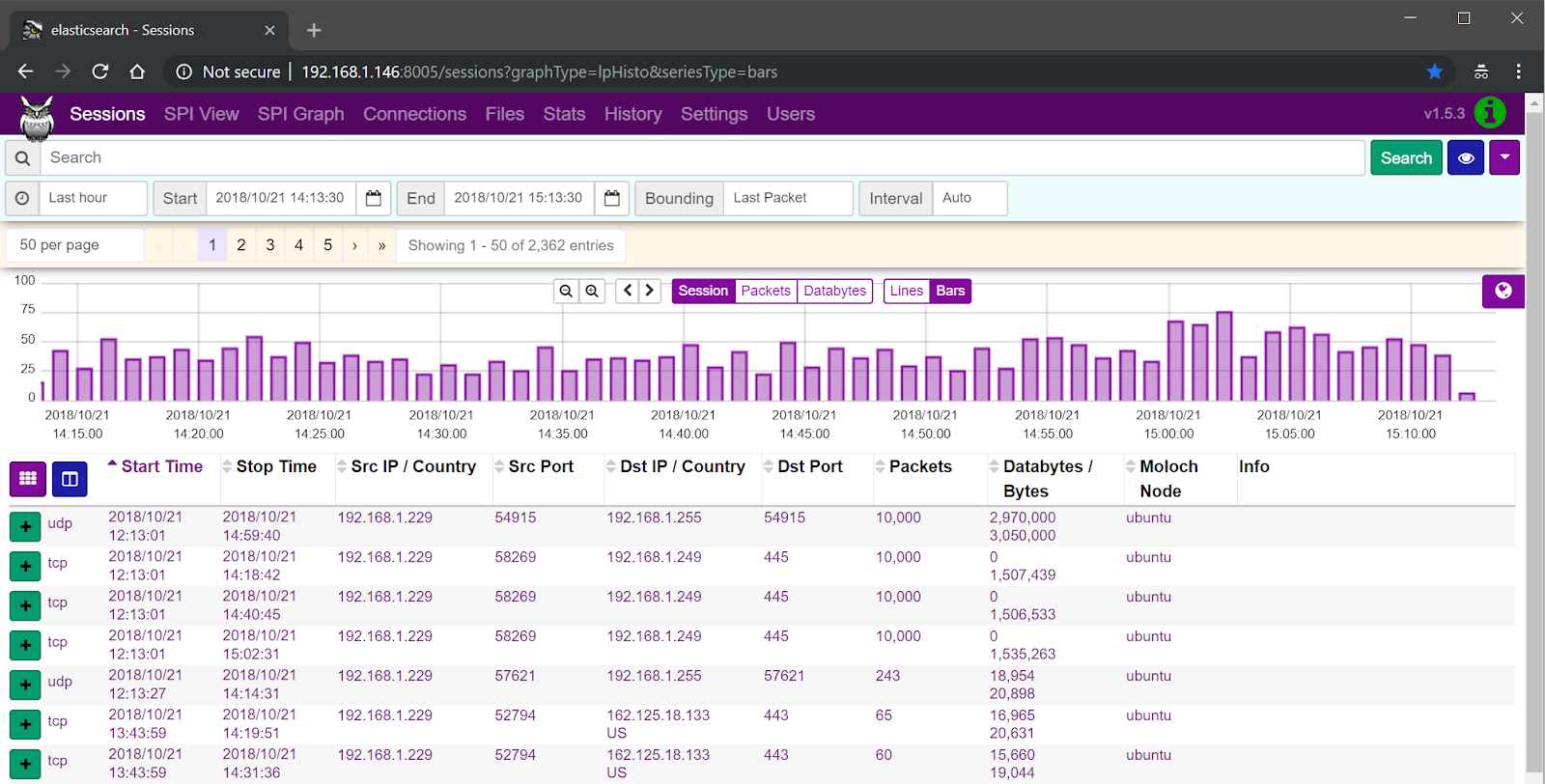 Now that you have Moloch installed, let's look at some JA3 hashes, in this example I'm going to be using the windows/x64/meterpreter/reverse_https payload.

We get the shell,

Now let's take a look at this traffic in Moloch (you might have to filter a bit on the port you used for your shell): 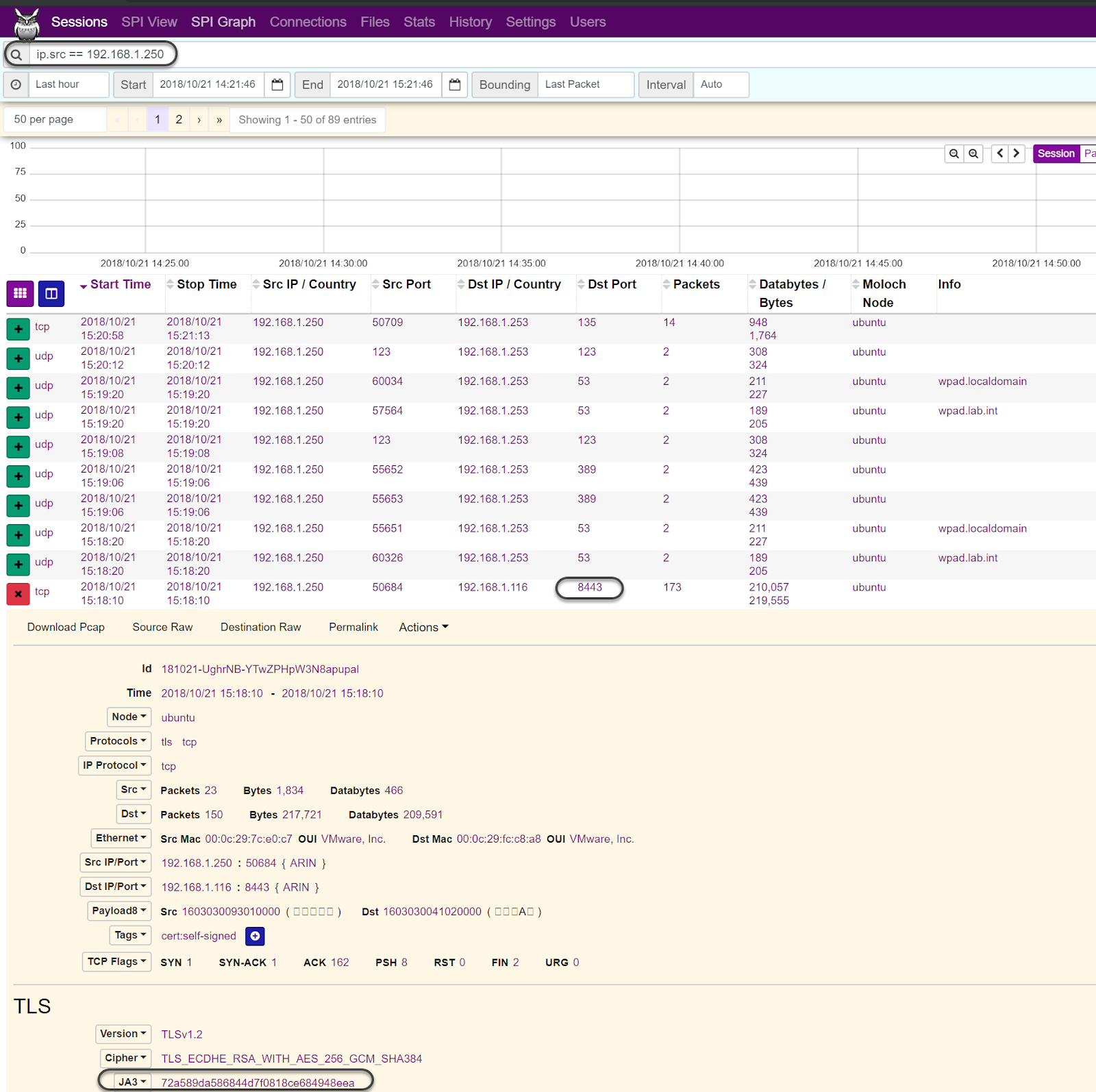 If we want to see where else this payload was executed on the network, we can click the JA3 hash to initiate a search: 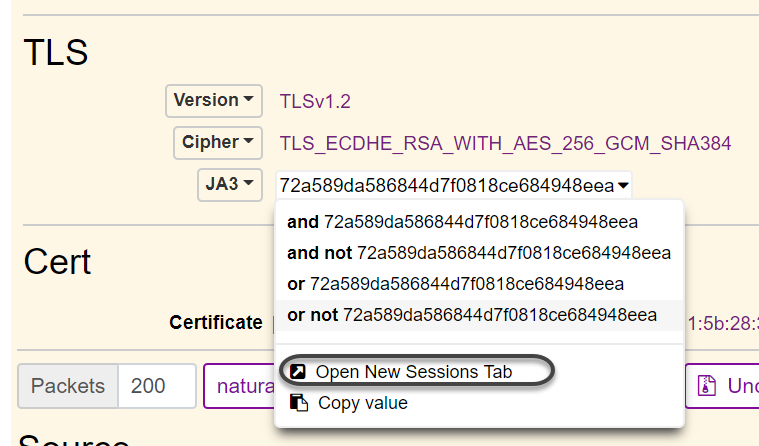 Which would change our query:

And we found our sneaky attacker executed their payload on more than one system, all via JA3 hash alone.

To install Suricata on our Ubuntu distro:

In my case, I had to edit the /etc/suricata/suricata.yaml file to change the network adapter from eth0 to ens33 and restart the service.

Now that Suricata is installed, you need to change the Moloch configuration to load the Suricata plugin, you also need to point Moloch to your suricata eve.json file.

Find and edit your /data/moloch/etc/config.ini file, my Suricata config.ini section looks like:

When I first fired everything up, Moloch threw an access error. To fix I did:

Now when you restart your Moloch services, you should be able to see Suricata data in Moloch.

Fire your payload up and look at the traffic again, this time at the SMB not the HTTPS traffic:

We can see Suricata flagged the SMB packets and hit a bunch of PowerShell rules. Neat!

I'm usually more comfortable with Endpoint rather than Network detections, but I think the Moloch+JA3+Suricata combo is an extremely powerful layer to add to your defenses.

None of this is new info, I just wanted to provide an overview as it took some Googling to put it together, maybe this could save someone a few minutes :)

​@ham3r for answering a bunch of dumb questions